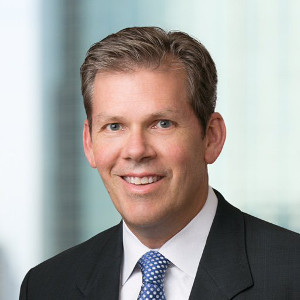 Fish earned a B.S. in accounting from Arizona State University and an MBA in finance from the University of Chicago. Since joining WM in 2001, he's held several key positions including many vice president roles and the role of CFO.

Fish is most excited for technology advancements to be executed by the newly-appointed chief digital offier.

When Jim Fish made the decision for Waste Management to donate $3 million to Hurricane Harvey relief after the storm ripped through Houston in August, he didn't do it with bottom line in mind. He made the call quickly, prioritizing the people of Houston, his employees and his city — all in an act of leadership.

Since coming on as company president and CEO in November 2016 — a move he says was "somewhat unexpected" — Fish has consistently practiced this people-first style of leadership, allowing Waste Management to elevate both in culture and as a business.

"It is something that I think a lot about," he said. "Am I making the right strategic decisions, for not only shareholders and customers, but also for 43,000 [employees] who, you know, a lot of them really don't have a voice?" Through this mindset, Fish says he has received feedback from his employees who have recognized a positive cultural shift in the company.

Giving the environment a voice has also been a top priority of Fish in this new role. In Waste Management's 2016 Sustainability Report, released in December, he marked a transition to begin measuring sustainability success through greenhouse gas (GHG) emissions reduction instead of recycling tonnage. "We’ve perhaps lost sight of the concrete environmental impacts that come from recycling," he wrote. This trend to phase out weight-based metrics became one to watch moving into 2017.

The aforementioned task of providing resources to hurricane victims was one that Fish has also faced multiple times already in his role as CEO. As soon as Hurricane Harvey settled, Hurricane Irma tore through the Caribbean and Florida, prompting a $1 million donation from Waste Management. Puerto Rico, which was rattled by Hurricane Maria just a few weeks later, was the beneficiary of Waste Management's company plane, filled with supplies for the victims.

When asked where his sense of generosity stems from in the face of these unfortunate situations, Fish offered a simple answer: his mother.

"My mom was one of the most generous people who never asked and never looked for recognition ... She would go over and lend a helping hand to people [in nursing homes] who she didn't know," he explained. "I didn't know a lot of these folks. I don't know anybody in Puerto Rico. But it was people who desperately needed help."

Of course, Fish is tasked with running a top waste management business — one that, just this year, jumped 20 spots on the Fortune 500 list and was named a World's Most Ethical Company for the 10th time — but his overall method of humble, principled leadership is what landed him as our 2017 Executive of the Year.

2018 will be the year of technological advancements for Waste Management. The company recently hired its first chief digital officer, Nikolaj Sjoqvist, who will help lead the company in digital and technology functions, including e-commerce, online-self service, information technology, analytics and data management.

"We're quickly moving toward much more of a customer-focused technology platform," Fish explained. His decision to bring on a CDO was one that was teased for months, and it will likely create a new wave of innovation and tech-driven competition in this industry that has stuck to its traditional ways for so long.

New technology will create a "differentiation of our services from others," said Fish. "You'll see us continue to perform well. We've had a good run at it, and I think you'll continue to see that."

View all | Post a press release
Nonprofits, NGOs: "New Yorkers Need Leadership from State Legislators to Increase Recycling, R…
From The Recycling Partnership
Industry Dive publications win 6 National Gold Azbees – most of any publisher
From Industry Dive
Alameda County Industries San Leandro Plant Expands Use of EverestLabs Robots That Are Increas…
From Alameda County Industries & EverestLabs
Editors' picks
© 2022 Industry Dive. All rights reserved. | View our other publications | Privacy policy | Terms of use | Take down policy.
We use cookies to optimize your experience on our website and for analytics and advertising purposes. By continuing to use our site, you agree to our cookie policy. Learn more
Accept