Editor's Note: The following is a summary of research recently published in the journal "Waste Management" with support from the American Chemistry Council's Plastics Division.

The environmental impact of plastics that are used for consumer products has been questioned often recently, especially with the heightened awareness of plastics leakage into the marine environment. This has led to a series of decisions to ban certain plastic containers and packaging and is now transitioning to specific consumer products such as straws and shopping bags.

While banning plastic straws and shopping bags may slightly reduce litter, bans on plastic packaging and containers would reverse environmental improvements that have been well documented. Although nearly all plastics are recyclable and recoverable, approximately 45% of the plastics that could be recycled end up in landfills largely due to improper disposal by the waste generator and lack of robust markets. The plastics that cannot be mechanically recycled can be chemically recycled or recovered for energy through alternative technologies such as waste-to-energy, gasification and pyrolysis.

EEC’s data analysis determined the decoupling of MSW from economic growth in the U.S. began between 1995 to 2000. To confirm this, EEC analyzed multiple data sources on both a weight and volume basis. MSW generation data was analyzed from both the EPA and BioCycle.

BioCycle​'s independent national MSW generation survey was also analyzed for a basis of comparison because it employs a different methodology than the EPA - site-specific and measured - to determine national MSW generation. The EPA data shows that decoupling begins around 1997. BioCycle data reveals decoupling occurs closer to 2000. Thus, both show that decoupling occurs but at different times due to the methodology.

MSW generation data from both sources were converted from a weight to a volume basis because landfill permitting and design is primarily based on volume. Volumes were calculated based on material densities, as well as based on an EPA weight-to-volume conversion factor. All MSW generation data was compared to personal consumption expenditure (PCE) in the U.S. from 1960 to 2015.

The results are shown below in Figure 1 with data indexed to 1960 because that is the first year information was available from the EPA. Indexing by weight (or volume) for a given year was divided by the weight (or volume) in 1960. 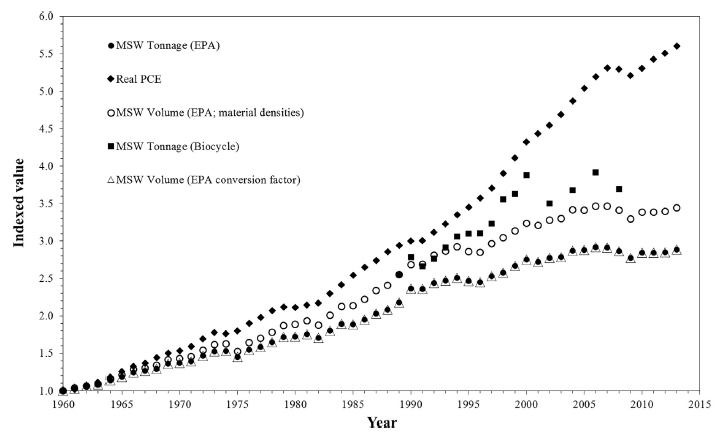 Figure 1: Indexed Comparison for MSW generation based on tonnage, volume, and PCE as a function of time

Evident in Figure 1, MSW generation in the U.S. decouples from PCE, regardless of data source and basis. Decoupling occurs on both a weight and volume basis of MSW generation.

EPA data was used for analyses in the remainder of the study because it is a larger data set than BioCycle, which only dates back to 2009. Based on the EPA data, decoupling in the U.S. begins between 1997 and 2000. Several studies in the literature on decoupling trends in the European Union relate policy and legislation in waste management as key causes. By comparison, the U.S. does not have national waste policies and the industry is driven by open market economics therefore, the decoupling trend shown in Figure 1 is not linked to any waste policy or legislation.

However, since the 1990s, there has been state and local legislation in the U.S. to reduce yard trimmings. Total MSW generation, excluding yard waste, versus PCE is shown in the parity plot in Figure 2 to confirm the presence of a decoupling trend. 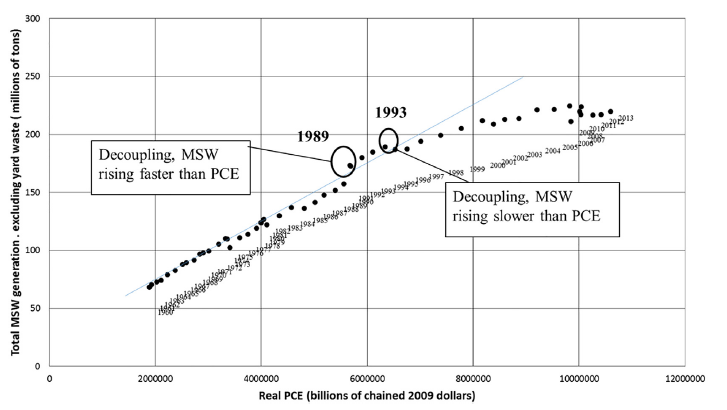 This shows that decoupling of MSW and PCE still occurs in the absence of yard waste and indicates that there are other factors in this decoupling trend beyond the yard trimming legislation. In 1989, MSW generation rises faster than PCE but then, in 1993, it begins to decline in rate and relative decoupling seems to begin between 1997 and 2000.

Because Figure 2 shows decoupling occurs in the U.S. in the absence of policy influences, EEC investigated the role that other materials, especially plastics, may play in the decoupling trend.

Since plastics entered mainstream consumer products in the 1960s, they have grown by nearly two orders of magnitude in the MSW stream. Interestingly, the total MSW generation has only increased by less than a factor of three in the same time period. 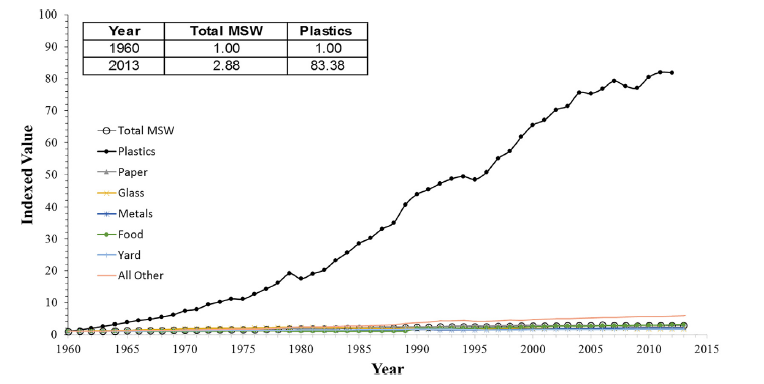 The trends in Figure 3 show that plastics grew exponentially in the MSW stream compared to all other material groups. The inset table shows that a cumulative amount of plastics in MSW were 83.38 times the amount that they were in 1960. Interestingly, during that same time period, total MSW grew by a factor of only 2.88.

Therefore, even though the amount of plastics in the waste stream increased substantially over time due to increased consumer use, plastics did not significantly increase the total weight of MSW generated in the U.S.

EEC further analyzed scenarios where plastic material would not be used by society to understand how plastics substitution for applications such as packaging impacted the total MSW generation in the U.S. and consequently, the decoupling trend.

Substitution ratios were obtained based on amalgamated data from major U.S. manufacturers. The weight of material that would be needed to replace plastics for the same product applications, such as containers, would be 3.2 times more than if plastics were used. The plastics substitution ratio for packaging applications ranged from 3.32 in 1960 to 4.5 in 2013.

The increase in weight ratio is a result of the downgauging — or thinning of plastics packaging materials — from 2000 to 2013. This suggests that if plastics did not currently exist, we would generate 4.5 times more packaging waste by weight because the alternative materials are heavier. Furthermore, it would require increased use of the alternative materials because they are not as efficient in packaging compared to plastics due to physical property limitations.

Figure 4: Wedge contributions for metal, glass, and other material substitution if plastics were removed from MSW, indexed to show time frame

Plastics are not only lighter than materials such as metals, glass, and paper, but they also lend advanced properties that preserve food longer and require less material, consequently reducing the amount of consumer items and materials that become waste. Figure 4 shows that in the absence of plastics, decoupling in the U.S. would not occur until 32 years later than it actually occurred with plastic items in the MSW.

Plastics are currently being presented in a negative manner in the media, particularly in regard to pollution in the marine environment. However, this study shows that plastics actually contribute to a more sustainable society as it relates to waste generation.

Decoupling of MSW generation from economic growth in the U.S. began between 1997 and 2000 and the gap continues to grow. In the meantime, plastics have grown exponentially since the 1960s, but they have not contributed significantly to the total generation of MSW in the U.S. As society aims to improve waste sustainability, the long-term impact and full life-cycle of materials needs to be assessed. There should be a shift in focus from the material itself that is considered a “pollutant” to the behavior that creates the pollution of our land and water.

Subscribe to Waste Dive to get the must-read news & insights in your inbox.